Explore the widest collection of 100% pure, virgin & cold-pressed oils for beauty and wellness 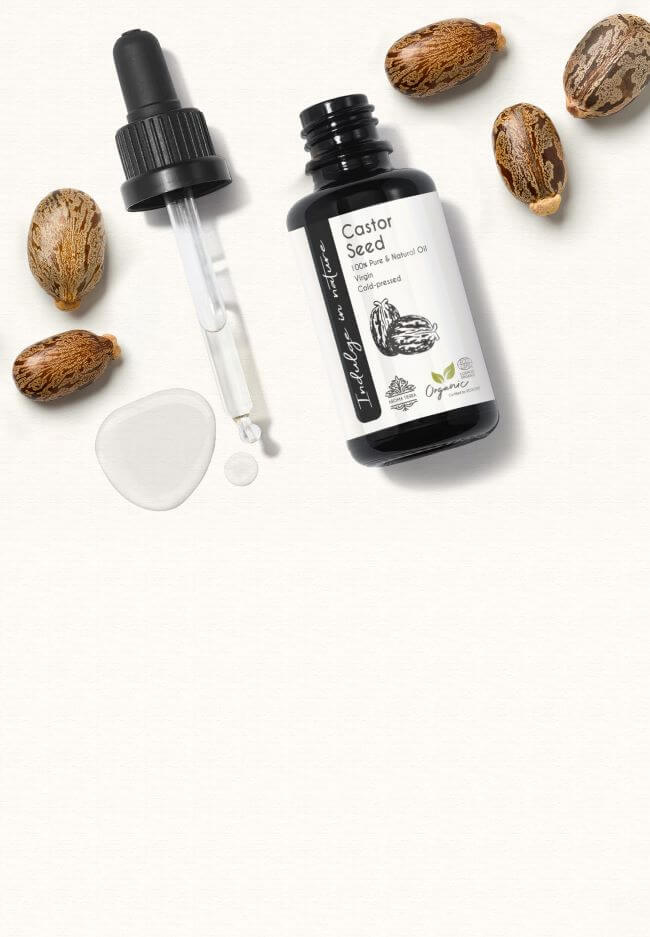 Suitable for all hair types, particularly useful to control hair fall and treat damaged hair
Boosts scalp health
Castor Oil helps to maintain a healthy scalp by treating dry and flaky scalp, soothing irritated and itchy scalp, and preventing scalp infections. It is known to improve the delivery of nutrients to hair follicles by improving circulation. It helps to dissolve and remove excess sebum-build up, thereby preventing associated hair fall. For a hair treatment oil, add a few drops of Rosemary and Peppermint Essential Oils to a mixture of equal parts of Castor Oil and Jojoba Oil.
Controls dandruff
The anti-inflammatory property of ricinoleic acid in Castor Oil reduces scalp inflammation and dandruff caused by seborrheic dermatitis. It reduces flaking by moisturizing and soothing dry, itchy, and irritated scalp. Further, its anti-microbial properties prevent scalp infections that can cause dandruff.
Conditions hair
Castor Oil helps to condition and moisturize dry, brittle, and damaged hair, making it look shinier, softer, and healthier. It forms a thin protective layer on hair strands that helps to retain moisture and protect from environmental damage. It lubricates the hair shaft, which improves flexibility and prevents breakage. Using Castor Oil regularly is also known to fend off split ends. For an ultimate restorative hair blend, apply a mixture of equal parts of Castor Oil and Coconut Oil and leave it overnight.

Suitable for most skin types, including oily and acne-prone skin | Comedogenic Index: 1
Conditions beard
Castor Oil is an excellent natural conditioner for a well-groomed and healthy beard. It works to soften, moisturize, and condition beard hair and improves its manageability and shine. It also enhances the flexibility of the hair shaft, which helps to reduce breakage and makes it easier to style.
Boosts beard health
Castor Oil supports beard health by nourishing the hair follicles, reducing inflammation in the hair follicles, preventing skin infections, controlling acne outbreaks, and soothing irritated skin. It is mostly a non-comedogenic lightweight oil that absorbs quickly into the hair and skin.

Boosts eyebrows and lashes
Applying a little Castor Oil can make your eyebrows and eyelashes appear thicker and fuller. It also helps nourish and hydrate the skin and prevent inflammation and infections, thereby supporting healthier growth. Rub one drop between your fingers and then apply. You can use a mascara applicator or cotton swab for mess-free application.

Suitable for most skin types, including oily and acne-prone skin | Comedogenic Index: 1
Treats acne
Castor Oil helps to clear the acne and prevent further outbreaks by fighting acne-causing bacteria. It also helps to moisturize the skin and stabilize excess oil production that may cause acne. Its anti-inflammatory property helps to soothe the inflammation and redness caused by acne. As it is non-comedogenic, it does not aggravate the existing acne condition.
Fights scars and pigmentation
Castor Oil is known to inhibit excess melanin production, which helps to lighten dark spots and hyperpigmentation. It facilitates the fading of unwanted blemishes and scars by penetrating the scar tissue and encouraging new tissue growth. It can help to fade stretch marks by regularly massaging onto the affected area.
Delays aging
Our collagen and elastin reserves deplete as we age, causing fine lines and wrinkles. Castor Oil helps to delay aging by boosting our skin's natural production of collagen and elastin. In addition, its powerful antioxidant property helps fight harmful free radicals that accelerate aging. Apply Castor Oil at night on a clean face and leave it overnight for maximum benefits.
Treats chapped lips
Apply a few drops of Castor Oil to treat dry, chapped lips and make them soft and luscious. It deeply nourishes the lips and encourages faster healing.
Reduces under-eye bags
Castor Oil is known to reduce the puffiness under the eyes owing to its potent anti-inflammatory properties.
Hydrates and revitalizes
Castor Oil helps to lock-in moisture to the skin and makes it soft & supple. It also forms a protective barrier on the skin which prevents water loss and provides protection from environmental damage. Castor Oil features in quite a few moisturizing formulas for its moisturizing and emollient properties.

Soothes skin conditions
The potent anti-inflammatory properties of Castor Oil helps to soothe several skin conditions such as redness, skin irritation, inflammation, dryness, burns, rashes, and itching. Its anti-inflammatory property is from the high content of ricinoleic acid (about 85-90%) in Castor Oil.
Relieves muscle and joint pain
Castor Oil is known to have analgesic properties thanks to high levels of ricinoleic acid that can help relieve the discomfort of muscle aches and joint pains. It also helps to reduce inflammation at the joints and relieve pain. Add a few drops of Eucalyptus and Peppermint Essential Oils to Castor Oil and apply on the affected area.
Heal wounds
Castor Oil helps accelerate wound healing by stimulating new tissue growth that quickly closes up wounds and prevents further infection. It also prevents dryness and build-up of dead cells that can potentially delay wound healing.

Suitable for most skin types
Moisturizes cracked heels, knees, and ankles
The powerful moisturizing and emollient properties of Castor Oil make it ideal for treating rough and dry skin conditions. It has a double-action approach for treating dryness - on one side, it forms a protective barrier which seals-in moisture into the skin, and on the other hand, it penetrates the skin to restore hydration and make it softer. Apply on cracked heels before sleeping and wear your socks to lock in moisture.

Massage a few drops into beard and skin

Massage onto clean heels before bed and wear socks

Castor Oil, also known as Ricinus communis, is a versatile plant-based pale-yellow oil extracted from the castor beans. While the Castor plant is native to East Africa, India, and the Mediterranian basin, it grows widely in several tropical locations globally, with India, China, and Brazil being the leading producers. Castor Oil has been used for thousands of years in folk medicine by many cultures to treat several conditions such as constipation, skin inflammation, eye-irritation, leprosy, etc. Later, it has also been widely used in the industrial sector to manufacture lubricating oils, paints, and varnishes.

Castor Oil is now gathering popularity globally for its skin-care and hair-care applications. It is unique because of high ricinoleic acid (~85-90%), a hydroxy fatty acid that offers superior emollient, hydrating, anti-inflammatory, and anti-bacterial properties.

Castor Oil is well-regarded for hair-care. It helps maintain a healthy scalp, soothes an irritated scalp, treats scalp infections, and controls dandruff. It helps to dissolve and remove excess sebum-build up, thereby preventing associated hair fall. Castor Oil has powerful hydrating and emollient qualities that deeply condition the hair and make them soft, silky, and healthy. It also prevents breakage and fends off split ends.

Castor Oil helps moisturize and condition the eyebrows and eyelashes and makes them appear thicker and fuller. Castor Oil is an excellent oil for beard-care. It supports healthy beard growth by nourishing the hair follicles, reducing inflammation, preventing skin infections, controlling acne, and soothing irritated skin. It acts as a natural conditioner and works to soften, moisturize, and condition beard hair. It also makes the beard easier to style and gives it a natural shine.

Aroma Tierra brings the finest Castor Oil extracted from the carefully handpicked organically grown castor beans from India. Our Castor Oil is 100% pure, natural, organic, cold-pressed, and virgin, with no further refining or processing to ensure that all the nutrients remain intact. It is free from solvents and hexane. Our Castor Oil is pale yellow in color and has a very mild characteristic aroma.

Aroma Tierra Castor Oil is ‘Certified Organic’ by ECOCERT, a globally reputed certification body from France, that has a stringent evaluation process. Our production standards guarantee that everything from the beginning to the end is organically made and that the oil is free from chemicals, preservatives, solvents, and hexane.

Our careful cold-pressed extraction method ensures that the delicate nutrients of castor beans are not destroyed by heat. Further, we do not deodorize, decolorize, or refine our Castor Oil. Refining the oil elongates its shelf life, but comes at a cost of destroying some of its natural nutrients. Therefore, we emphasize on using the cold-pressed, non-deodorized, and virgin quality to gain the maximum benefits.

Furthermore, we use specially designed violet-glass bottles to preserve the oil's potency and elongate its shelf life.