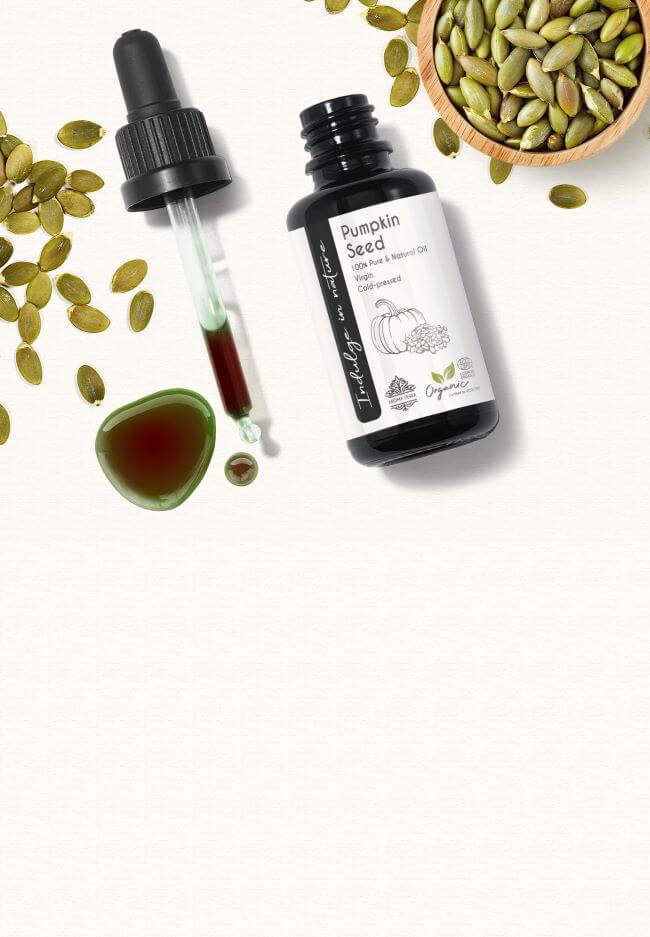 Suitable for all hair types, particularly helpful for male-pattern baldness
Controls male-pattern baldness
Male-pattern baldness or androgenic alopecia is the most common cause of hair loss in men. It occurs due to an increase in androgen hormone known as dihydroxy testosterone (DHT). Pumpkin Seed Oil helps balance this hormone, therefore preventing hair loss and encouraging hair growth. Both internal use and topical application of Pumpkin Seed Oil have shown results in promoting hair growth. A study showed that men who took 400 mg (~0.4ml) of Pumpkin Seed Oil every day for 24 weeks enjoyed an increase of hair count by an average of 40%, without any adverse effects.
Promotes hair growth
Pumpkin Seed Oil promotes hair growth by providing deep nourishment to the follicles, controlling dryness, and soothing the itchy or inflamed scalp. Its potent anti-inflammatory and antioxidant properties help maintain a healthy scalp. The oil also protects the hair protein and hydrates follicles for more shiny strands.

Supports prostate health
Study shows that the prostate enlargement may be slowed, stopped, and even reversed by consuming Pumpkin Seed Oil. Studies suggest that Pumpkin Seed Oil may also be an effective complementary and alternative treatment for BPH (Benign prostatic hyperplasia). It aids in improving prostate health because of its high content of carotenoids and liposoluble vitamins. Zinc in the oil acts as a diuretic to help empty the bladder and reduce inflammation, which can help in dealing with urination issues because of the enlarged prostate.
Supports heart health
Pumpkin Seed Oil is an excellent addition to your daily diet to improve heart health. It is an abundant source of phytosterols, antioxidants, and healthy unsaturated fatty acids. Phytosterols are structurally similar to our body's cholesterol and compete with cholesterol for absorption in the digestive system. As a result, the absorption of cholesterol hampers, and blood cholesterol levels reduce, thereby boosting heart health. Further, powerful anti-inflammatory properties of the oil also contribute towards improving overall heart health.
Boosts immune system
Pumpkin Seed Oil has a high content of zinc, iron, magnesium, vitamin E, and other nutrients that help support healthy immune function. Deficiency in zinc and iron often leads to a weak immune response and could cause auto-immune disorders. Consuming a spoon of Pumpkin Seed Oil every day is a great way to get your recommended daily intake of nutrients.
Supports women’s health
Pumpkin Seed Oil is rich in phytoestrogens, and initial studies on animals suggest that the oil's regular intake may help in low estrogen conditions. This study indicates that Pumpkin Seed Oil may have promising benefits for postmenopausal women.
Relieves joint and muscle pain
Initial studies suggest that Pumpkin Seed Oil can be useful in reducing joint and muscle pain. It is rich in potent antioxidants such as carotenoids, vitamin E, and phytosterols, which effectively scavenge harmful free radicals that cause inflammation. This antioxidant action helps provide relief from inflammatory conditions such as arthritis and rheumatism. The oil may also helps protect against free radical damage which may over time lead to age related painful diseases such as osteoarthritis.
Improves mental well-being
Consuming Pumpkin Seed Oil could assist in improving the overall mental well-being. It contains high levels of magnesium, which is essential in the maintenance of the body’s stress-response system and increasing GABA levels (Gamma aminobutyric acid) in the brain to encourage relaxation. Pumpkin Seed Oil is also a source of zinc which helps relax the body by increasing serotonin production in the brain.
Supports urinary tract health
Pumpkin Seed Oil helps in supporting urinary tract health. A study shows that oil significantly reduced the symptoms of overactive bladder. Zinc, selenium, potassium, and other trace minerals found in Pumpkin Seed Oil help strengthen the bladder muscles and soothe them when irritated. Carotenoids help in treating malfunctions of the bladder and the urinary passages. Further, the diuretic property of potassium and zinc help empty the bladder and reduce inflammation.
Boosts sperm quality
Pumpkin Seed Oil may help improve sperm quality because of its high zinc content. Zinc helps balance the testosterone levels, which is essential for creating high-quality sperm.
Heals wounds
Preliminary studies on mice show that Pumpkin Seed Oil exhibits would healing properties due to the high presence of vitamin E, sterols, and linoleic acid that effectively promote quicker cell regeneration and facilitate cell turnover. These beneficial qualities of Pumpkin Seed Oil can help treat minor cuts, wounds, abrasions, and scars on the body.

Suitable for all skin types, particularly acne-prone | Comedogenic Index: 2
Hydrates and revitalizes
Pumpkin Seed Oil offers excellent hydrating, emollient, and revitalizing properties owing to its rich fatty acid profile of omega 6 & 9 fatty acids and palmitic acid. Besides providing long-lasting hydration, the emollient property of the oil makes the skin soft and supple. Its rich antioxidant content, including vitamin E, protects from free radical damage that causes premature aging. It is a lightweight oil that is easily absorbed by the skin without making it greasy or clogging pores.
Fades scars, marks, and blemishes
Pumpkin Seed Oil improves the overall skin tone and fades marks and blemishes, thanks to the presence of vitamin E which encourages cell turnover, ß-carotenoids which induce a natural glow to the skin, and phytosterols which fade scars.
Treats acne
Studies have shown that less omega 6 fatty acid in the skin makes it more prone to acne. High omega 6 in Pumpkin Seed Oil helps it in fighting acne. Besides, zinc and vitamin E in the oil help discourage acne growth. Further, the anti-inflammatory property of the oil help soothe inflamed skin and reduce skin redness
Delays aging
Pumpkin Seed Oil offers excellent anti-aging properties owing to the presence of vitamin E, carotenoids, zinc, and polyunsaturated fatty acids. Its antioxidant property helps in fighting free radicals and rejuvenating the skin for a more youthful appearance. Zinc in the oil helps with the formation of new skin cells and the production of collagen.

Apply to affected areas after cleansing and leave overnight

Apply generously to soothe the skin

Fondly called ‘Green Gold’, the Pumpkin Seed Oil has a long and rich history. It is harvested from the seeds of the common pumpkin or Cucurbita pepo. First originated in Mexico, Pumpkin and has been around since 9,200 BC and is one of the world’s oldest cultivated plants. Pumpkin was likely introduced to Europe in the 15th century, soon after when America was discovered. By the mid-18th century, various benefits of pumpkin seeds were known worldwide, and its oil was extracted from the tough shelled seeds of the Pumpkin. In fact, the then Austrian Empress, Maria Theresia, proclaimed that Pumpkin Seed Oil should not only be a food source but should also find a place in chemist stores to use in ointments and plasters. Earlier, pumpkin seeds used to have thick shells that were hard to consume; overtime, varieties of pumpkins emerged with shell-less seeds, which simplified the oil extraction process and increased the yield. Today Austria is one of the leading manufacturers of Pumpkin Seed Oil, and more than 2000 tons of oil is being pressed in the quaint town of Styria in Austria.

Pumpkin Seed Oil offers incredible health and beauty benefits. It is packed with vital nutrients such as vitamins E, carotenoids, phytosterols, omega 6 & 9 fatty acids, zinc, iron, magnesium, other trace minerals, and a number of antioxidants. Pumpkin Seed Oil is a natural remedy to support prostate health. Study shows that the prostate enlargement may be slowed, stopped, and even reversed by consuming Pumpkin Seed Oil, and it may be an effective treatment for BPH (Benign prostatic hyperplasia). It is also known to support urinary tract health and alleviates symptoms of overactive bladder.

An abundant source of phytosterols, antioxidants, and healthy unsaturated fatty acids, Pumpkin Seed Oil is an excellent addition to your daily diet to improve heart health. Phytosterols in the oil hamper cholesterol absorption by the body, thereby bringing down the blood cholesterol levels and boosting heart health.

Pumpkin Seed Oil also helps in boosting immunity, reducing inflammation, and alleviating joint and muscle pain. The oil may also help in relieving menopausal symptoms because of the presence of phytoestrogens. Consuming Pumpkin Seed Oil could help improve overall mental well-being as it contains high levels of magnesium and zinc, which are essential to encourage relaxation.

Pumpkin Seed Oil is well-known to prevent male-pattern baldness and encourage hair regrowth. A 24 week long study showed that men who took 400 mg (~0.4ml) of Pumpkin Seed Oil every day enjoyed an increase of hair count by an average of 40%, without any adverse effects. Pumpkin Seed Oil is also useful in promoting scalp health in general and encouraging hair growth by providing deep nourishment to the follicles, controlling dryness, and soothing the itchy or inflamed scalp. It is equally beneficial for the skin - it hydrates the skin, prevents premature aging, treats acne, and soothes dry & irritated skin.

Aroma Tierra brings the finest Pumpkin Seed Oil extracted from the best quality organically grown pumpkin seeds from Styria region in Austria. Our Pumpkin Seed Oil is 100% pure, natural, organic, and cold-pressed, with no further refining or processing to ensure that all the nutrients remain intact. It is free from hexane and other solvents. Our Pumpkin Seed oil exhibits dichromatism with green and red colors, a property of pure Pumpkin Seed Oil.

Aroma Tierra Pumpkin Seed Oil is ‘Certified Organic’ by ECOCERT, a globally reputed certification body from France, that has a stringent evaluation process. Our production standards guarantee that everything from the beginning to the end is organically made and that the oil is free from chemicals, preservatives, solvents, and hexane.

Our careful cold-pressed extraction method ensures that the delicate nutrients of pumpkin seeds are not destroyed by heat. Further, we do not deodorize, decolorize, or refine our Pumpkin Seed Oil. Refining the oil elongates its shelf life, but comes at a cost of destroying some of its natural nutrients. Therefore, we emphasize on using the cold-pressed, non-deodorized, and virgin quality to gain the maximum benefits.

Furthermore, we use specially designed violet-glass bottles to preserve the oil's potency and elongate its shelf life.

Romania
Romania
from AED 139
Sold out