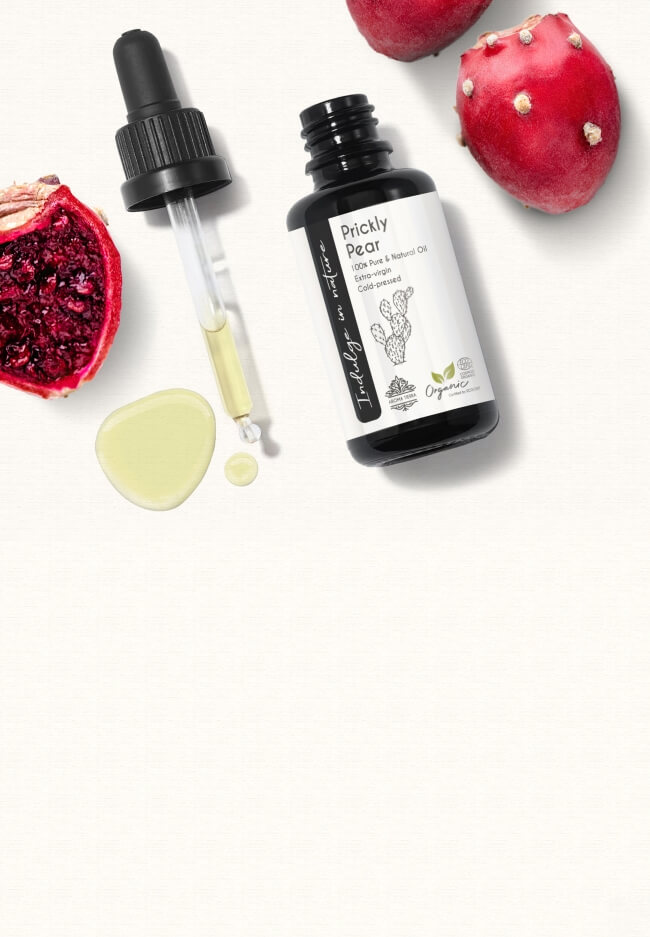 Strengthens nails
Prickly Pear Oil is good to repair and restore damaged cuticles and nails. It keeps the nail bed moisturized, healthy, and strong. Apply Prickly Pear Oil with the help of a cotton swab to protect your nails from drying out and becoming brittle.

Suitable for all skin types, including oily or sensitive skin
Moisturizes & revitalizes
Prickly Pear Oil is a very nourishing and hydrating body oil. It helps to improve the skin texture, even skin tone, and make the skin soft, supple, and youthful. Apply it generously on your body on damp skin.
Soothes skin conditions
Prickly Pear Oil is a gentle oil that has great anti-inflammatory properties that help soothe skin conditions such as redness, itchiness, dryness, and inflammation. It is also helpful in repairing skin damaged by overexposure to the sun’s rays and environmental pollution. Add Sea Buckthorn, Black Seed Oil, and Hemp Seed Oil for a powerful soothing blend.
Lightens stretch marks
Prickly Pear Oil is known to reduce the appearance of stretch marks by promoting skin regeneration. Add Rosehip Oil and Tamanu Oil for additional benefits.

Gently apply under the eyes

Prickly Pear Oil has an expensive price tag attached to it due to its labor-intensive and time-consuming production process. It is extracted from the tiny seeds, where each seed contains only about 5% oil. So it takes a whopping 25-30 kgs of seeds or 8 tonnes of the fruit to produce just 1 liter of the oil!

Regarded as ‘a miracle oil’, Prickly Pear Oil is an amazing multi-tasking oil that offers outstanding hydrating, healing, and anti-aging properties. It is one of the most effective skin-nourishing botanical oils in the world! It is a light oil with a satiny and richly smooth texture that gets readily absorbed, leaving the skin looking velvety soft, supple, and radiant.

Prickly Pear Oil is a superfood for the skin as it is full of antioxidants, vitamins E & K, omega 6 & 9 fatty acids, amino acids, zinc, polyphenols, and phytosterols. It has extremely high levels of vitamin E and is the only plant to contain all 24 known betalain antioxidants! It also contains among the highest percentage (>85%) of unsaturated fatty acids than any other oil, with an optimal ratio of linoleic to oleic at about 3:1.

Aroma Tierra Prickly Pear Oil is ‘Certified Organic’ by ECOCERT, a globally reputed certification body from France, that has a stringent evaluation process. Our production standards guarantee that everything from the beginning to the end is organically made and that the oil is free from chemicals, preservatives, solvents, and hexane.

Our careful cold-pressed extraction method ensures that the delicate nutrients of Prickly Pear Oil are not destroyed by heat. Further, we do not deodorize, decolorize, or refine our Prickly Pear Oil. Refining the oil elongates its shelf life, but comes at a cost of destroying some of its natural nutrients. Similarly, deodorization rids the oil of its nutty aroma, but it compromises the nutritional profile of the oil. Therefore, we emphasize on using the cold-pressed, non-deodorized, and extra-virgin quality to gain the maximum benefits.

Furthermore, we use specially designed violet-glass bottles to preserve the potency of the oil and elongate its shelf life.